Heat Pump Water Heaters – We Need to Get this Right 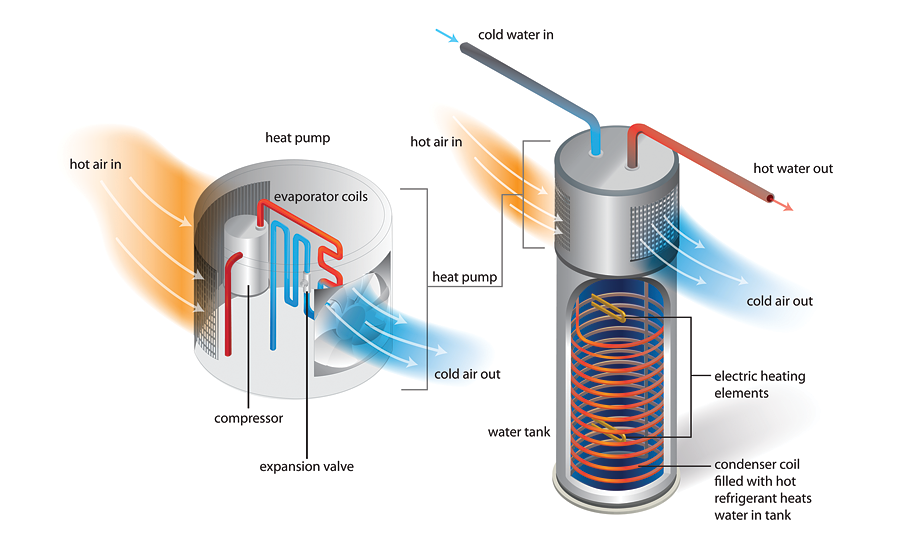 Residential thermal loads (heat and hot water) account for most of the natural gas consumption in California. To meet its aggressive greenhouse gas reduction goals, the state needs to reduce or eliminate as much of this consumption as possible.

The good news is there are readily available, reliable, and affordable electric alternatives for gas furnaces and gas water heaters. Electricity, unlike fossil fuels, can be supplied by a variety of carbon-free sources such as solar panels, wind turbines, geothermal power plants, hydroelectric generators, and many others.

We witnessed what can happen if a push like this isn’t done well. In the 1970s, solar thermal water heating rebates were generous, contractors installed them en masse, and most never reached their full potential. Solar thermal systems leaked, the tanks failed, and overall, it was not a successful effort. Making the same mistakes with heat pump water heaters today could deal a significant blow to the building electrification effort.

Efficiency First California is the program implementor for Sacramento's Municipal Utility District (SMUD). SMUD is currently offering a $2,500 per unit rebate, which is the highest rebate in the state. Our participating contractors are installing loads of these units, and generally speaking, they have been a good solution.

However, there are some challenges and things to consider, both for homeowners planning to install heat pump water heaters and, more critically, for program designers. I wanted to share what we have learned after seeing over 1,000 units installed.

Heat pump water heaters work by circulating refrigerant in small copper tubes submerged in the water heater tank. The refrigerant moves the heat from the air surrounding the unit and transfers it, via conduction, to the water. The process is a beautiful thing: no fire, no combustion, no emissions. The process is not as fast as heating with a flame, but it is much more efficient. With no open flame, no hot flue, and no natural gas to leak, heat pump water heaters are safer, too.

Heat pumps make noise. Heat pump water heaters are only a bit louder than refrigerators (which also work on heat pump technology), but they can have long-run cycles. Careful consideration is required when selecting a location for a heat pump water heater. If you install one against a bedroom wall, and the customer is a light sleeper, you might get noise complaints.

Lots of water heaters are in garages. Most garages don't have a 220v circuit, which most heat pump water heaters require. Adding an electric circuit increases the cost and complexity of the installation. There are few new models out there that can run off 110v, which provides more installation options.

In many jurisdictions, a heat pump water heater must have a dedicated outlet by code. That means they can't share the power with a furnace or another appliance.  That may change as the technology matures, but for now, heat pumps need a dedicated circuit. Using 110 volts helps, as it is cheaper to run than 220v, but it still requires an electrician for the installation.

Plumbers install most water heaters. Putting in a heat pump water heater usually requires both a plumber and an electrician. That adds to the cost of the installation and can be a hurdle for the contractor. If a contractor is just a plumber or just an electrician, they won’t have the proper license to do the work.

Heat pump water heaters work by extracting heat from the air surrounding them. These units also discharge a fair amount of cool air. The cold air is transferred from the cold water to the air as it is heated. If there is not enough air, they won't operate at maximum efficiency. Most manufacturers offer the option to duct them to another source of air to address this concern. The cold air discharge can be a problem too. Install an un-ducted heat pump water heater in a basement, and exhaust will cool the space. The cold air might be welcome in the summer, but it could be a concern in the winter. Some passive house folks use the discharge from heat pump water heaters to cool the house in the summer effectively; that's a creative solution. The bottom line is that you need to consider where you put the heat pump.

If you are fortunate to live in a region with low electric rates, heat pump water heaters are a great solution. If your house has solar panels, and you generate your own electricity, even better.

If you live in a region with high-priced electricity, like San Diego, a heat pump water heater will likely cost you more to operate than a gas alternative, at least for the moment. The cost difference may equal out over time, as natural gas will get more expensive. The public utility commission is aware of this barrier and is working on new electric rates for all-electric homes. In the near term, heat pump water heaters may be more expensive to operate, even with their improved efficiency.

Have You Got Solar?

Anyone with photovoltaics (solar panels) should absolutely consider heat pumps. Don't stop there.  If you have solar, you should electrify as much of your home as you can to take advantage of the powerplant you own, which happens to be on your roof.

Heat pump water heaters work by using a small amount of heat over a long period. If you have a 50-gallon unit and four people who shower in the morning, you may run out of hot water. If two of you shower in the morning and two take showers at night, it likely won't be an issue. To avoid running out of water, step up to the next size tank. The heat pumps for 50-gallon, 65-gallon, and 80-gallon tanks typically use the same amount of electricity to run the heat pump. Step up to the next tank size, and the operational penalty will be minimal, but the capacity will improve significantly.

The safest delivery temperature for hot water to a home is 120 degrees. A mixing valve allows you to heat the water in your water heater to a higher temperature and still deliver it to the house at a safe temperature. Heating water to 130 or 140 degrees and mixing it down to 120 increases capacity significantly without much loss. The higher operational temperature effectively increases the tank size.

Mixing valves are a great option if you have space constraints. Let's reconsider the example of four people taking showers at the same time.  With a 50-gallon water heater set to 120 degrees, you may run out of hot water. Increase the temperature to 130 or 140, and you will have the same effective capacity as a larger tank.

Having the option to heat the water higher and mix it down can solve many issues. A mixing valve is something we have always required on SMUD rebated water heaters. The ability to turn up the heat is well worth the additional cost.

In fact, I would not install a heat pump water heater without a mixing valve, period. I would encourage all program designers to include them as a requirement. It is a simple and effective means to overcome capacity issues and is cheap insurance.

Mixing valves are also safer. If you think you can avoid installing a mixing valve and just turn the unit up, I caution you that this is a risky approach. When the temperature increases, the risk of scalding increases logarithmically.

Check out the chart below. 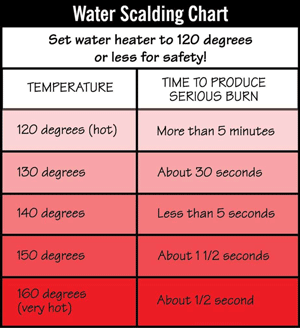 As you can see from the chart, turning up the temperature just a little bit can create a severe hazard. The most susceptible groups are children and older folks. Scalding happens quickly when water temps go up. Install a mixing valve, and you’ll be able to heat at a higher temperature while making sure no one gets burned.

Avoid hybrid modes – which rely on the heat pump plus the electric heating elements. Use the Eco Mode or Heat Pump Only setting. These settings make sure you are only using the heat pump functionality. If you have installed a mixing valve or selected a larger tank, you will likely meet all of your needs with the heat pump alone. Using the heat pump without the resistance heat strips will maximize your savings.

Some jurisdictions require an expansion tank on the cold-water supply. An expansion tank is essentially a built-in weak spot in the plumbing that can expand or contract as the temperature changes. Homeowners should look for them on their contractor's bids, as they indicate a higher quality installation. Program designers should consider requiring expansion tanks. Some manufacturers won't warranty their product unless the install includes an expansion tank.

Consider Connecting to the Grid

Many new heat pump water heaters can be connected to the internet. Being grid-connected might have significant benefits in the future. Many utilities are looking for ways to manage loads by remote control of their customer's products. Grid connectivity might allow you to get paid from your utility during periods of high demand. Water heaters have an expected useful life of 12 to 15 years. The grid connectivity feature will probably come into play at some point done the road.

Let’s Get it Right, This Time

Heat pump water heaters are an exciting and efficient option for both gas and traditional electric water heaters. They do require some additional considerations in installation and operation. If sized and installed correctly, they are the most efficient option available for heating water.

Electrification is a logical solution for reducing our carbon footprints, and heat pump water heaters are an integral part of that solution. We just need to make sure we get the implementation right, as we don't want to repeat the mistakes made in the 1970s with solar thermal water heating.

Are Consumer Protections in the Heating and Cooling Industry Working?

The Inflation Reduction Act (IRA) is a Big Deal

Contractors are facing two significant challenges to growth today. Supply chain issues are the first. Can you guess the second?

Advocacy Update: July 2022 – Why California Policy is Big on Electrification